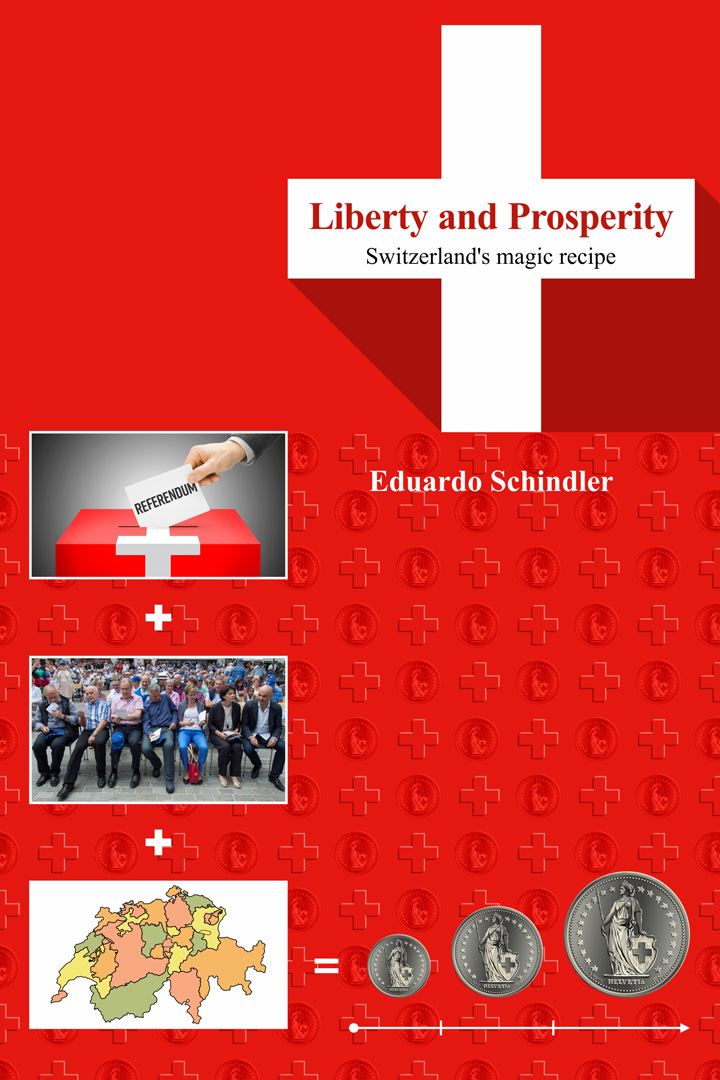 All nations aspire to the highest possible level of liberty and prosperity for their people.

Some countries manage to do this better than others.

No one in the world has done and does it better than Switzerland.

In the early 1900s, the Helvetic nation was still one of the many poor countries in Europe. Today it is the nation with the highest wealth per adult – by far. And it is also the one where people enjoy a combination of liberty, justice, peace, security, fairness, and socio-economic cohesion at an unparalleled level.

How did the Swiss nation achieve this ?

Thanks to the “magic recipe”, which has governed community life in Switzerland uninterruptedly for more than 100 years.

This recipe has three main ingredients, which are illustrated on the cover of the book. Just click on the respective pictures to get a first impression of them.

Each of the ingredients contributes in its own way to the unparalleled level of liberty and prosperity that exists in the country. But it is above all the combination of them that makes the difference. Each ingredient helps to enhance and reinforce the contributions of the other two – thus fostering the virtuous circle of growing liberty and prosperity that the country is experiencing. And it is also thanks to this combination that the Swiss rule of law enjoys an unsurpassed level of credibility and fiability among citizens of other countries as well.

Switzerland’s experience clearly teaches that it is only through greater liberty that a nation can genuinely and sustainably achieve greater prosperity – and not vice-versa. And it also reveals that greater prosperity in turn requires a citizenry with greater freedom as a necessary and imperative condition for maintaining a balance and equivalence between the levels of civic/political maturity of the population and the greater economic “maturity” (i.e., wealth) that people attain.

This experience also shows that access to certain levels of freedom is a long-term “fruit” – and is achieved on condition of accumulating many years, perhaps decades, of political stability and continuity that alternating governments in representative democracies will probably never be able to provide.

The interaction between liberty and prosperity is certainly a living and dynamic process. And it can be either progressive or regressive. In the absence of one, the other element will sooner or later cease to advance. And it can even fall into a “reverse gear” in case a very large gap and imbalance is created between these two fundamental dimensions of the welfare of any society.

It is worth noting that in addition to the intrinsic benefits received from applying the recipe, it is also thanks to it that Switzerland lives free of the worst deficiencies that plague so many representative democracies – including: dominance of centralist partitocracy; abuses and excesses of professional politicians; preponderance of demagogy and partisanship; manipulation of public opinion based on doctrinaire slogans aimed at polarizing society; relationship between political leaders permeated by rancor, hatred, accusations, falsehoods, defamation, slander, libel, denigration, and insults; corruption and embezzlement; poor quality public services; decaying infrastructure; repression of minorities; useless bureaucracy; violent demonstrations; etc.

One of the most valuable conclusions to be drawn after several years of research, analysis and reflection is that the magic recipe can also be implemented in other nations that aspire to follow Switzerland’s example – that is (i) to enter into a progressive spiral of greater liberty and prosperity in an irreversible and lasting way, and (ii) to free themselves from the many deficiencies listed above.

In this context, the main objectives of this book include: